To celebrate the ANZAC day Room1 wanted to show their respect to the soldiers that went to fight for their country and never returned home. The class read "Flanders Field"  and created their own descriptive poem using the same structure and description. 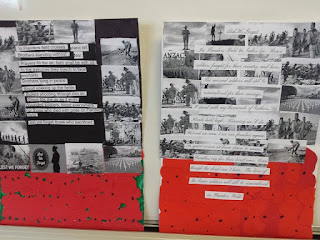 ANZAC
As the war begins death waits upon the soldiers.
The whistle blows our men charge to battle the foe.
As tears drop down another one is lost. Blood dampens the ground,lying against his brothers.
As the trumpet plays,we shed tears for our beloved.
The ground listens to the broken hearted in furious pain.
Lest we forget those who fought for us to stand today in peace.

We will remember them


In flanders field, the poppies grow,
A blood red shield of the bodies below,
The field has been divided in columns, the soldiers lives have hit rock bottom,
A century later their loyalty still shows.


They gave their lives to their country,
They hoped faith would pull them through,
Death lurked round the battle field,
Praying on their souls.


Although they are silenced,
Their lives still live on,
The crosses shine as the sun rises and sets,
We will remember them,
Lest we forget.

Popular posts from this blog

April 04, 2016
Room 1 Classroom Ambassador
Last week the class had the honour to see Reneeta Masilagi presented with her classroom ambassador badge at the whole school assembly. She was voted by the class as a student who is respectful, kind, caring and who cares about the class and their well being. As a leader Reneeta has a good work ethic and she believes that as a leader she must also be a very effective learner who strives for success.  Congratulations Reneeta Masilagi I know you will be an amazing classroom ambassador.
https://youtu.be/VlreRZzqX1k
Read more

May 17, 2016
"SIPAIO"
As the Room 1 teacher, I am extremely proud of the commitment and respect of the students in Room 1. They have thoroughly enjoyed learning about my Niuean culture. This week the class had learnt how to sing a song that every Niuean child learns when they are young. "Sipaio" is a fun vibrant song that translates to the movement of ones body when singing this vibrant song.
https://youtu.be/ZL7ig8fba1A
Please visit this link and listen to the beautiful voices of Room 1.
Read more 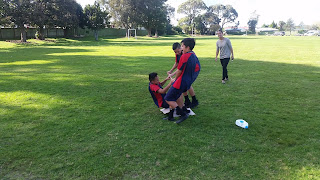 As a fun way to introduce the Niuean language to the class I decided to teach Room 1 two Niuean games that children play at the Niuean village sports day.
Game one is a skiing game where the students are dragged across the grass while holding onto a long stick. The idea is to balance and stay on the coconut tusk with out falling.


The second game is a game just like javelin where the students must throw a stick called a "Sika" as far as they possibly can. The winner is the thrower who has thrown the "Sika" furtherest.